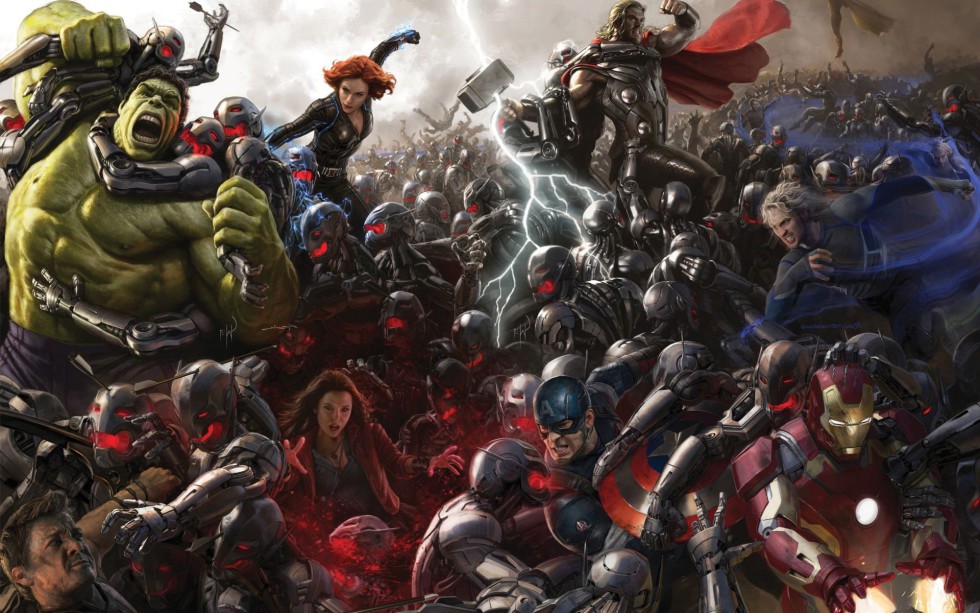 Let’s start with this: The following review contains spoilers for Age of Ultron. They start after the following paragraph, which is why you need to click the link to read the rest.

Right, so my problem with AoU is that it’s a comic book event series. Its purpose is to make people need to go and see it to wrap up the past and understand the future episodes. It’s the exact kind of Age Of Secret War On Ultimate Earth cross-francise bullshit that generally kicks me off any super-hero comic series I’ve started to get into. Suddenly, in order to follow the arc of a character I need to buy twelve comics across nine series, five of which my local shop doesn’t carry. The actual plot of the movie doesn’t really maintain its own momentum.

This is a bit of a shame, because the bit of the movie where it’s most comfortable in its own skin is the best bit of the trailers, where all the Avengers from the first one are hanging around in the dregs of a party screwing around with Thor’s hammer, before Ultron gets to monologue at them a bit.

James Spader is possibly the closest thing Whedonesque dialogue has to a spirit animal. The arch one-liners flow like mead, the slightly zig-zag sentence flow works well. Second to Sorkin, Whedon writes some of my favourite dialogue/monologue. I enjoyed every word that came out of his mouth. There was just not enough of the core story for him to hang his hat on. His plan is opaque, his reasoning blurred. He recruits lieutenants for their abilities, and while he has compatriots to talk to you can follow his own hero arc, but from the end of Act 2 onwards, there’s no depth to him at all. He’s just a mass of bad guys.

Scarlet Witch and Quicksilver get backstory but not much depth. Their powers used as screwdrivers to assemble the plot elements and put wheels on it, and rarely do you see the edges of their abilities; which is distressing in a franchise which has so far done a good job of defining superheros as much as what they can’t fix as what they can. The Hulk/Black Widow arc didn’t feel any more tacked-on than any romance arc ever does, but the crushing halt it comes to as it reduces the whole concept of relationships to procreation was a blow. I can understand an intention of “It makes me feel like a monster” followed by an explanation of why that is, and other further examples of why Natasha feels monstrous for what she’s done and had done to her. But the whole thing seems cut as short as possible to set up the Hulk’s abandonment of the rest of the team, which was starkly better done.

The Vision was introduced in a hurry, and felt very much like the god being poked out of the machine, existing so that he was there for that battle and is now an Avenger, without having any actual explanation or even much characterisation. Mostly, it seems, so that there’s nowhere else he has to have an origin story glued into, while still having time to be carefully refrigerated when Thanos kills – or “kills” – him at the end of Infinity War part 1, where the final shot is of Thanos pulling on a completed infinity gauntlet. (I’m guessing, obviously).

Then they blow up an eastern european city, with a facility that can make thousands of Ultron bots, and vast reserves of power and Stark-level technology, that nobody noticed being built.

And this is all fridge logic. I enjoyed watching the movie, without engaging deep analysis. I suspect another watching will get more out of it. There were a few lines that have caused a lot of consternation that honestly entirely missed me as being at all dodgy, and whether that’s my own privilege or lack of some experiences making that happen, I’m not sure.