I’ve been, in the past, a firm distruster of ad blocking software. I still am, to a large extent. I don’t trust any company whose finance model is based on inserting exceptions for advertisers they like. But I installed Ghostery, whose model is to use the stats of what gets blocked to offer consultancy to companies to make their adverts less horrific. I like this idea, so I support it. My Ghostery install is fairly open, blocking only sites that offer page-takeover, popups, autoplaying videos, and other stuff that annoys me a lot. So I get a bit annoyed when I’m scrolling through a Wired article and get something like this:

Fine. I don’t disagree with the sentiment, but I don’t read Wired often enough to care about being a member, so yeah, ad supported isn’t unreasonable. Do you know what’s unreasonable, Wired? This is what happens when I whitelist your site: 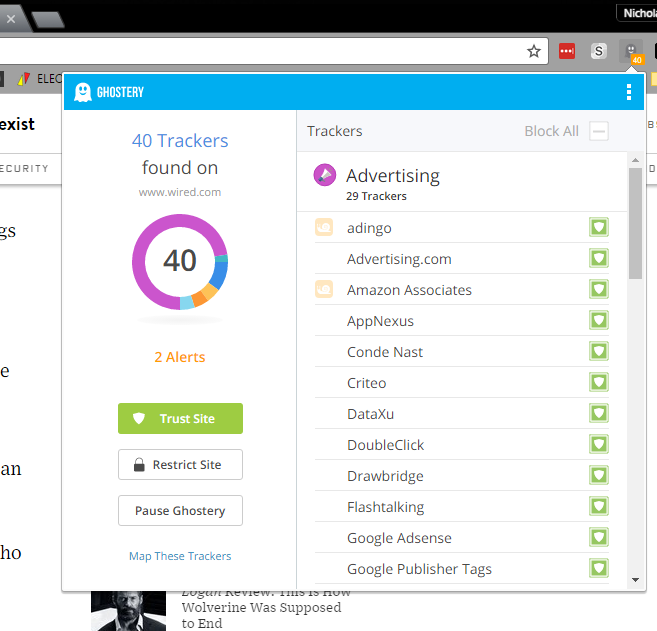 That’s *forty* scripts you’re loading in for tracking, advertising, affiliate marketing, analytics, comments and display fonts. Up from twelve that I had whitelisted already, and – and here’s the best bit – if I leave the tab open to (say) write a blog article about this bullshit, it goes up to FIFTY NINE. 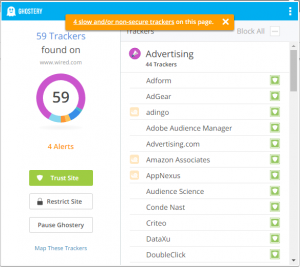 ‘m not militant about never being tracked, nor being advertised to. I’ve worked for web marketing companies, and I’ve attempted the shit soup that is making bank from content on the internet, I know there aren’t any good options. But this isn’t about any of that anymore, it’s making your site _worse_ by installing dozens of these things and slowing everything down. It’s unchecked – the number of these things that duplicate functionality is just crazy – and to put your sanctimonious little message over the top of the remaining bits of actual content when your users try to filter it is actively user-hostile.

Last and maybe worst, each one of these externally installed scripts is – potentially – an unvetted bit of code you’ve added to your page. Javascript isn’t the security nightmare it once was, but every new script is a new vector, and you can’t tell me that every single one of those – checking the tab again – eighty four snippets of code has been reviewed against all the others for security flaws or side effects which might make the user experience worse or unsafe.

It just needs to stop.