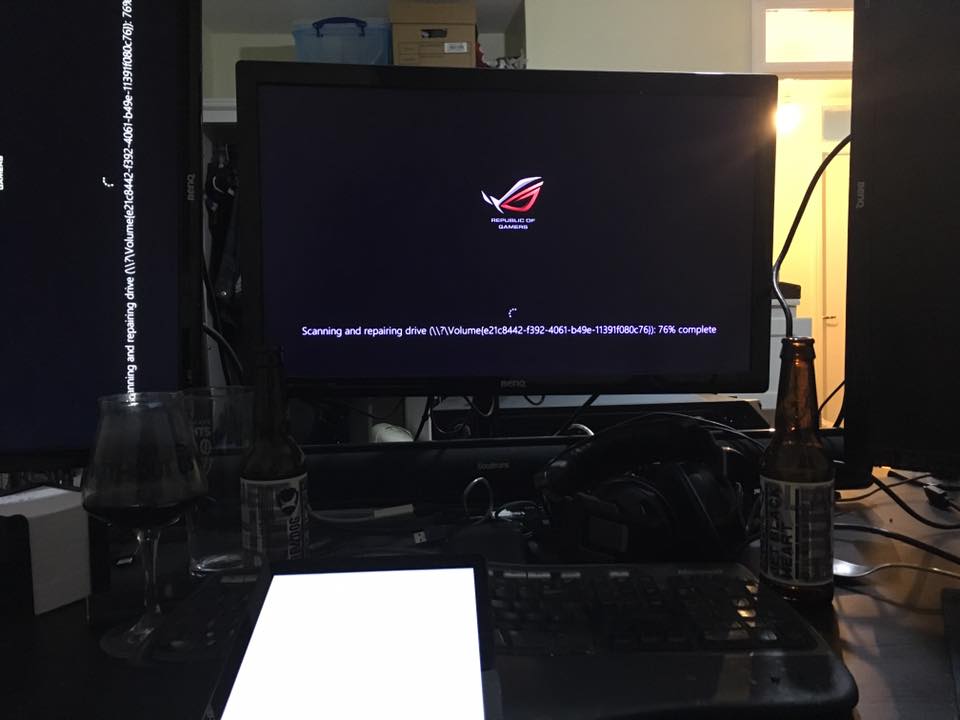 Family stuff’s been on my mind recently, and there’ll be a deep post about the last couple of months at some point. It’s been a while since I did deep personal here, and that’s probably good for my life in general, but I can’t help but realise that I’ve got archives of my life going back 16 years here and 10 on livejournal, but for the last four or so anything of deep import’s gone to Facebook. I mean, I archive my facebook posts to machines I control, but it worries me a bit how much goes up there.

Anyway, Odyssey’s next week, and I’ve been spending evenings reviewing and recoding in prep for that. Work’s ramping up a bit, so that’s a lot of my head, and I was looking forward to spending this evening putting all of those things out of my head for a couple of days and brain-reset with the aid of some mindless pixel shooting.

Resigned to the death of my hard drive, I dug out an old spare drive and set my old windows test laptop to download the Win10 media to a USB key, and found a Linux-based boot CD with a drive checker on it. Happily ever after, that came back with no problems, and rebooting into Windows worked again. So I’ve installed SSDLife and upgraded the firmware on the drive, and now I just hope it doesn’t happen again…

Well, more than hope, really. My system is designed so that almost everything I care about is on a different drive, the different drive is actually two mirrored hard-drives, the contents of that drive are backed up to Backblaze, and most of the important stuff is also synced with Dropbox. Losing my SSD would mean some hours redownloading a couple of games (though most are on a third drive), a while reinstalling software, a pile of irritation and a significantly less relaxing weekend. But it wouldn’t be a disaster.

I had my disaster about 15 years ago, and a lot of my documents and music went with it, and my setup was tested last year when an errant bit of software deleted the contents of my dropbox (which calmly resynced the now-empty folder to all the machines that once held it).

But yeah, today is National Backup Awareness day. Ideally your backups should consist of something local, something connected, and something nearby. I use an external drive for local, Backblaze connected, and Dropbox sync for nearby.