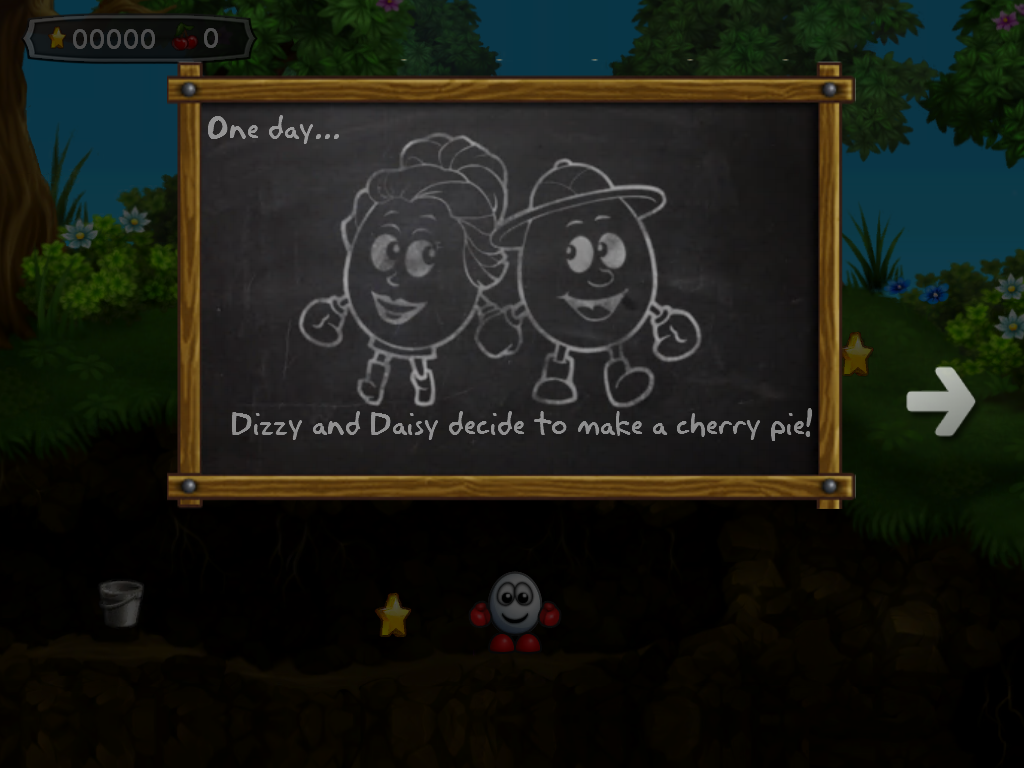 So today, I’m going to tell you a tale of a game with an open world, filled with characters who repeat the same dialogue, where a primary concern is how full your inventory is and how useful a large percentage of it will be, and involves defeating trolls.

Dizzy has been released for Android, iPhone & iPad. The earliest games I can remember playing:

The first Dizzy game came out in 1986 – I’d have been five – and was perilous. You had three lives, a single inventory slot, and touching any dangerous thing at all would kill you instantly. In modern game parlence, it’s a game of fedex quests, but with a single item inventory. So you pick up the grease-gun to fix the cart, which means you can’t carry the birdseed which allows you to kill the birds, and you need to get the diamond across the map which means swapping over to get the raincoat to stop the water killing you occasionally. Lots and lots of back-tracking.

By the time of POTY, which the new release is a port of, came out the inventory had been beefed up a lot and the instadeath mostly restricted to “Don’t fall in the sea” and “Don’t stand in the fire”.  With the new version comes infinite lives, which makes the game easier.

It’s not very good, though.

It’s a perfectly servicable port of the original game, but with updated graphics, but it suffers from a half-hearted finish that lets the game down. It just seems a few steps away from being complete.

The biggest gripe for me is one that’s followed the game since the unremake, it suffers from a excess of float in the jump which makes precision platforming quite hard. Dizzy’s jump move is quite complicated for a platformer, in that has you jump he somersaults, and if you land while he’s somersaults he’ll roll for a bit until he stands up. This doesn’t seem consistent, and sometimes when you land you’ll roll directly off the platform you were trying to hit. If it was predictable when this would be, I’d be less irritated, but it butts against one of the other fundermental flaws with the game: You can’t tell where the platform ends. The new game has beautiful, cartoony graphics where your platforms connect to the trees behind them, where the clouds float in mid-air, but invisible on top of this is the edges of the platforms, which don’t match up to where the cartoon hand-drawn graphic says they do. In a game where you are required to stand at the very edge of a platform in order to make a jump, it’s incredibly annoying to fall though it instead. Dizzy has gained a Batman/Lara Croft style move where if you *almost* hit a platform, he will grab at it and hang there looking worried, but this doesn’t help, because he can’t – with his stubby little red gloves – pull himself up. It just delays your inevitable fall and death with a cheery animation.

There seems to be a half-finished integration with something as well, although it doesn’t call to Gamecenter or Twitter or anything; but when you actually do something you get a first-person announcement about it, like this: Games can be unforgiving, so long as they’re fair. As long as the reason why I’ve just plummeted to my death is that I didn’t pay attention, it’s all fine, but this isn’t that.

As a call to nostalgia, it works wonderfully. I spent the time wandering though this game (Spending a lot of it wandering backwards and forwards having entirely forgotten you can jump on clouds) remembering trying to finish various Dizzy games on various 8-bit devices in the 90s, and it’s a faithful recreation of the kind of 8-bit platformer I really used to love beating my head against.

As a modern game for iOS and Android, it’s unpolished and the controls require more precision than the game allows. Without the Infinite Lives addition, it would be an exercise in pure frustration, but as it is I can highly recommend it for people who remember the old games and wish to wallow for a while. For everyone else, there are better games out there.

I hope it does well, though, because if they can tighten up the controls for the next one it could be a star.

A final point: Codemasters: Releasing the iPad and iPhone versions as two separate games is a Dick Move, especially when there are no differences between them. The iOS Universal Binaries system is good for customers. And thus ends the week of Thailand. You might have missed the second to last episode “One day in…
aquarion
No comments
2 minute read

So, at some point someone is going to have to explain what Digitiser was, and they can’t, because…
aquarion
1 minute read

I’m currently playing the Open Beta for Champions Online, the new game from the studio that made City…
aquarion
No comments
4 minute read
Loading Comments...