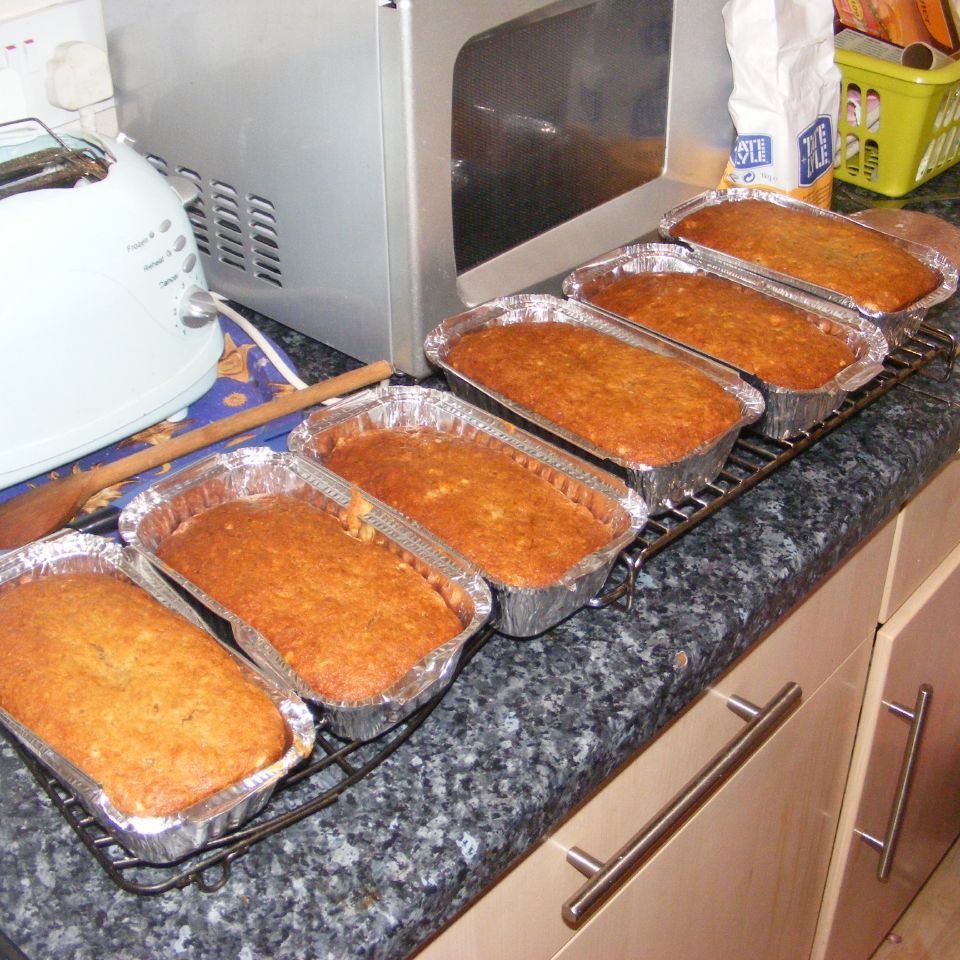 Today I spent two hours looking at houses, and five deliberating which one to actually move in to. There is a genetic trait in my family, when worried or stressed, bakery happens. So.

Having weighed up the pros and cons of each, I ran out of ways not to make the decision and went downstairs. Downstairs was a blessing in disguise: A collection of overripe bananas, bought just before Christmas, that would be perfect for banana bread. Hey look! A distraction!

First, catch your banana bread recipe. I’ve done this bit, so you don’t have to. Trawling though the internets, I found few that were in British (rather than the “take two boxes of rice” brand of American) and only a few that looked good. And only one that contains rum is Nigella Lawson (Pretend I’ve inserted a joke involving either the word “Denephew” or some reference to her breasts, as this appears to be mandatory when talking about her cooking). Discover her recipe requires, as well as rum, walnuts and sultanas. Cut them out. Discover the sultanas were the reason for the rum, and slightly regret doing so. sigh and begin:

(The fish thing will make sense in a bit. Nearly)

Our unit for creation is the Demifish (🐟). One Demifish makes two loaves of banana bread. All other units are in Metric, for you can prize the metric system from my cold, dead, 1980s-primary-school-educated fingers. Or translate them using Google.

Shock Troop Optional Sandwich Toaster is, as its name implies, optional. If you want to take its option, do this:

Take the Optional Even Smaller Bowl and put 100g x Demifish of Sultanas in it. Then add about a double-shot per Demifish of either Bourbon or Rum, then leave them alone, soaking up the alcohol like a stereotypical student.

The general format is going to be we make things in the smaller bowl and then add them to the larger bowl. So:

Take your large bowl and add to it the ranks of Shock Troop Legion Pyrate either by simple pouring or by sifting though a sieve, depending on exactly how many spoons (metaphorical) you have, or how much effort you wish to devote to the task. You’ll need about 150-175g flour, two teaspoons of baking powder and a half teaspoon each of bicarb & salt, multiplied by Demifish. If you are me, then you will realise you don’t have enough flour, which is when you take the Recyclable Carrier Bag and take it to your nearest shop that will sell you some. Then, use a spoon (literal) to stir the white powders into each other a bit. Put the bowl aside.

Take the ranks of Shock Troop Legion Astound and combine them in the smaller bowl. Because I am a lazy bastard, I used the whizzer for this, but you are entitled to waste your energy however you feel. You’ll need 125g of butter and 150g of sugar per Demifish. You are reminded that this is cookery and not nuclear science, and that adding too much butter or sugar, or just not enough, is not going to kill anything. Once again, if you are me, you will realise you don’t have enough sugar, take your Recyclable Carrier Bag and apply it.

Also at this point, you can add a half-teaspoon (x Demifish) or so of Vanilla essence. And/or a shot of rum, if you like. AND TO THE CAKE MIXTURE!!

Dump the mutilated goop of Shock Troop Legion Astound into the large bowl and mix with a spoon (literal).

Obviously the final act of this circus is going to be to mash the recruits to Shock Troop Legion Screwdriver together, and add them to the bowl too. This recipe works better the riper the bananas are, up to a point where the bananas are too ripe even for Banana Bread. If your bananas come out of their skins like toothpaste from a tube, this may be true for you. You’ll need about 4 small bananas, or 300g deskinned, per Demifish, and two eggs per Demifish. The eggs, like the bananas, will work best if you remove the contents from all packaging before use.

If you realise you don’t have enough eggs either, once again you will need to apply your Recyclable Carrier Bag. I would recommend going to a different shop this time, though, as you might get funny looks.

Add Shock Troop Legion Astound to the grand masterplan, and if you’ve decided you need more fruit in your diet Shock Troop Optional Sandwich Toaster too. Then attack it with gusto, force, style and a spoon (literal).

Now, my demifish value for making this was 3, and since I don’t have six bread loaf tins, I bought – one one of my many applications of the Recyclable Carrier Bag – a small pack of chinese-takeout-style tin-foil tubs, and used those, and that seems to have worked quite well.

So, take your massive bowl of uneatable (Raw eggs, remember) goop, and divide it semi-equally between your bread-loaf-tin based empire. Then place them all in the oven for about an hour to an hour and a quarter. When you can poke deeply them with a sharp object and it comes back ungoopy, they’re all ready. Then let them cool bef… I SAID LET THEM COO… Oh, all right then, get me a slice, won’t you? It’s been noticed, so I should really explain. The Buffometer, like the webcam and the “listening to” bit,…
aquarion

O2, who happen to be my mobile provider already, have won the rights to be the iPhone provider…
aquarion

It starts as all things should… At the beginning. A dark sky, dotted with stars. Lines appear, joining…
aquarion