I’ve not had a great day.

I’ve got a rotten cold that’s filled my brain with cotton wool, my computer rejected a software update hard enough to require a system restore (Advice: Avoid Catalyst 12.1), I had to throw out dinner when it became obvious the chicken was out of date (which was after I’d spent the time making it), and I’m generally feeling like the universe was waiting for today in order to subdue any optimism I have.

But over the course of the day, starting yesterday afternoon as my Australian friends started the day, I’ve had a steady stream of trills from my phone as people from every part of my life and lives have wished me happy birthday, from family to people I haven’t seen or spoken to since I walked out of the office I worked with them in, though to people from Usenet, IRC, computer games and larp systems. A stream of people who give enough of a care to write two to five words into a text box on Facebook, which is nice. 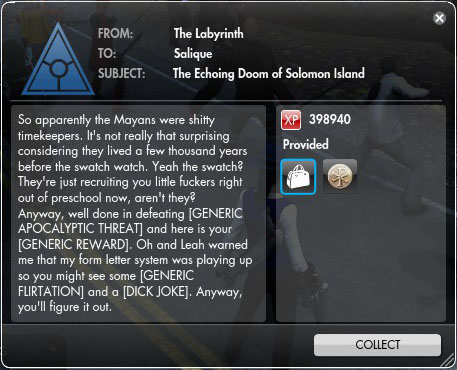 Work I pushed a thing live. It took 12 hours, I’m still fixing bugs in it, but it’s…
aquarion

I think I just created a new mask, Something I swore not to do ever again. About three…
aquarion

Ok, Webirc clients working and online. All announcements given…

Ok, Webirc clients working and online. All announcements given or posted. If you havn’t got a URL for…
aquarion

Moron. Me, I mean. It's 1am, and I just Cooled the Bondgirl…

Moron. Me, I mean. It’s 1am, and I just Cooled the Bondgirl thing on the right, linking to…
aquarion