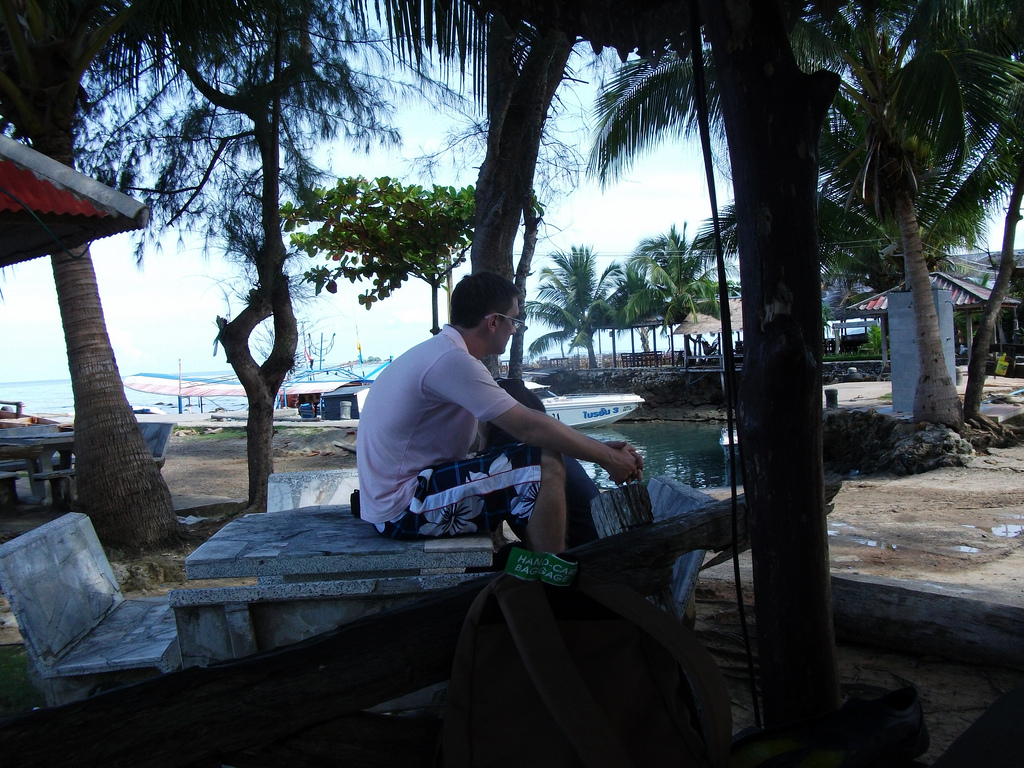 The resort is glorious. We have separate little air-conditioned cottages facing a central area of greenery and wildlife. The singing is not glorious.

The first night we were here, the main reception restaurant area played host to possibly the worst Karaoke session I have ever heard in my life. The singers fumbled the keys like a drunk returning home, and when they decided to do classic western numbers they sang every separate syllable with panash and inaccuracy, and with no real concept of the word itself, leading to a gruesome and grisly murder of a tune already bruised and bloody with the application of Casio keyboard backing tracks and years of cliche abuse. I assumed this was a result of karaoke, but as I sit here listening to Wonderful Tonight being sung by the world’s worst lounge singer, I wonder if their imitation wasn’t actually spot on. Even Chris De Blurgh doesn’t deserve this kind of treatment.

Somewhat to my surprise, the situation actually worsened after the Karaoke. Apart from the nightly concerts, about more later, the restaurant plays host every evening to a man and his guitar, regaling us with his original takes on Beatles songs. Times when he is not playing are filled with piped awful covers. The one night we ate the hotel – the island offering a bewildering array of seafood restaurants and BBQ places so remaining at the hotel isn’t at all necessary – we carefully sat on a table as far as we could from the main covered stage, and poked fun at his awful singing from afar. Not a single patron was sitting anywhere within a dozen tables of the doomed idiot, and so the hotel staff decided to move the entire shebang to a smaller stage only a dozen feet from our table. His literally off-beat, off tempo, off words version of Norwegian Wood (with large sections of the song compressedintobreathlessexpressionsofmindlesssyllables in order to fit the chord structure WHEN THE SONG HAD CHANGED THE CHORD STRUCTURE) made me physically wince. He didn’t stop, either, going though an almost complete rendition of Rubber Soul before moving on to more unfortunate targets.

The British Daily Mail have, over the last twenty years or so, embarked on an impressive and all encompassing project to sort every item, ingredient, colour and concept in this world into two camps: Those which do, and those which do not cause cancer. I feel that large parts of my current existence are devoted to a similar pursuit: That which I can do, and that which I should not. Reluctantly, I must put snorkeling on the second list.

After a night of insomnia, I was woken up just in time to eat breakfast before a taxi (which was a pick-up truck with benches in the back) took us down to Kaibae where a speedboat was waiting to take us on a three hour jaunt around the tropical island of Koh Chang and surrounding idylls. Because I was not thinking very clearly on three hours sleep, I did not bring my sunglasses or bathing shorts, but swimming in normal shorts is pretty much the same thing and today – as opposed to yesterday – I managed to take my wallet out of my pocket before hitting the water.

Swimming around Koh Chang is warm. I do not expect the sea to be warm. With the boat moored off an island I could easily imagine setting the scene for a Robinson Crusoe reenactment, me and my family donned our extra large slippers and slipped into the turquoise blue mist of a coral reef. The warm salty water was slightly cooler than the air above, and wonderful just to swim in.

Swimming in flippers was also fine, once I got the hang of it. Interestingly, the flippers scaled in all directions by shoe size. So on my size 11 feet I got webbing that covered an area the approximate size of Scotland in front of me, where my more minipodded siblings could only flap around rubber mats the size of Luxembourg.

Snorkeling, though, wasn’t really working for me. To start with, I’d managed to trap my hair in with my goggles, so they slowly filled up with water though the broken seal. When I fixed that problem I discovered that my desire to not have my nose filled with water – it made me sneeze – wasn’t compatible with the mask either. Generally, I found I could look under for around ten seconds before either I sneezed, my mask filled up, or my snorkel did. The last particularly bothered me, as it meant short amounts of “calm blue ocean, calm blue ocean” followed by rapid panic of “drowning, drowning”. Plus, without my glasses, I could only see a few feet.

What I could see, though, was beautiful. Unspoilt corel reefs with sea creatures resting on them, schols of tropical fish of zebra stripes flicking under the boat, clouds of small black fish darting into the safety of the coral’s hollows. The whole thing was gorgeous, and pending contacts or people shooting LASERS into my eyes, I’d like to do it again. Maybe scuba diving too.

The boat took us to a few places, one with a weird current that gave us patches of cool water giving way to more sauna-like heat and then to chilling pools within the sea. Eventually we ran out of time and came home.

Taxis on the island don’t cater to my original theory. Mostly they seem to either belong to hotels or to orbit the island around the main ring road. They are almost entirely pickup trucks with planks either side in the back, and it’s 50 Baht (around a pound) per person from anywhere to almost anywhere, and the driver will pick up people and drop them off more like a rotating bus service than a taxi. Some places are 100 Baht if they off the main drag and the driver doesn’t think they’ll find more people on the way. Tomorrow is our last day on Koh Chang, after which we head up to Pattaya, where my brother’s stag party is going to be, for a few days (during which I’m going to wander over to Bangkok) and finally up north to the far-off site of the wedding itself.

The hotel is beautiful.

The staff are calm and polite.

The breakfast is nice.

The swimming pool is warm.

The minibar is cheap.

In general, this could be the perfect hotel. But.

Since the 1st May there has been a festival going on a couple of fields away. The sound system is expertly produced and carefully tuned, so that from this distance – around a kilometre, I guess – the band’s sound is faithfully reproduced and I can hear every component of every song, from the over-dramatic Thai singer hanging on to the end of every last note, to the twittering lead guitar dancing around the melody, down to the steady bass guitar backing every track and the energetic drummer keeping a rapid and developing beat.

I hear them, and I respect that this band – unlike a lot of the bands I have listened too over this same interface over the last five days – are probably quite good. However, I got three hours sleep last night, and while their faithful sonic reproduction is technically very good, the fact that the best double glazing the hotel has to offer and two thick pillows render each note perfectly formed is significantly more than I need out of a musical interlude right now. Coupled with a tendency to end every song with a heavily dramatic crescendo reminiscent of the finale of a really good concert that crashes into each and every entry on the track-listing like they’ve granted a rare and special encore, and I’m starting to wish I had the power to open up the earth beneath them and send them and their perfectly constructed sound system deep into the earth where whoever builds the really deep tunnels – Tibetans, apparently – can be just as entertained.

That this stops at half midnight is little comfort, as it comes with the sure knowledge that it does the same tomorrow, too, and the band is unlikely to be as worth reproducing.

14th May It’s impossible to see all of Bangkok in one day, and I know, for I have…
aquarion