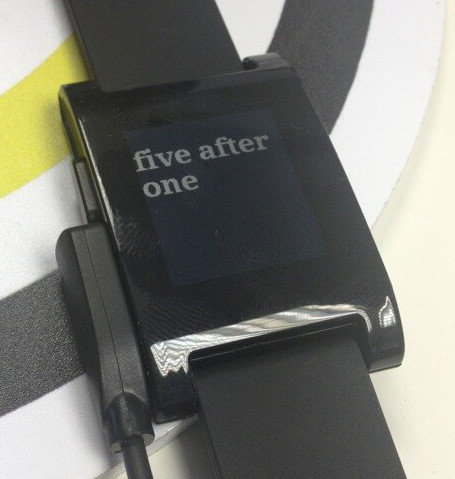 The pebble in Watch mode.

I find it somewhat suspicious that in the last couple of weeks, as the 70,000 people who backed Pebble’s Kickstarter start to get their rewards, that the interest in an Apple branded smartwatch has reached fever pitch.

The Pebble is a smartwatch in the same vein, a bluetooth-connected extension to your phone, so that notifications from it can appear on your watchface, you can control your phone’s music, and basically your watch becomes a remote control for your phone.

My Pebble arrived yesterday, and I’ve been prodding it a bit. More long-term thoughts when I’ve been using it for a while, but here’s my first impression.

Let’s start with the hardware. The face is a bit chunky. I haven’t measured it exactly, but it’s about a centimetre thick, and takes over most of my wrist, as you can see below. It seems solidly built, with a nice curve to the screen, and comes with a rubber watch-strap of standard size (which I intend to replace quite soon). Charging happens over a magnetically attached USB cable, the design of which allows the casing to remain waterproof down to 180ft. Since my bath’s not that deep, that should be enough for me…

The screen is a backlit e-ink kindle-style screen of sufficently high resolution that I don’t notice any pixels at normal viewing distance. The backlight (which can either be activated with an ambient light sensor or by activity) is bright enough to the display by, but neither dazzling or distracting, and you will probably not be able to use it as a torch, for example.

The setup process is a bit unwieldy right now. You’ll need to install the Pebble app for your phone first,  attach the thing in your phone’s own Bluetooth settings (where it says “Verify the Pebble is showing this set of digits” when it doesn’t appear to be able to do that until the new firmware is installed), and then back to the Pebble app to activate it and upgrade the firmware, which takes about five minutes.

After that, you have a watch which will buzz and display your most recent text message/email incoming.

The iPhone app’s not very good, right now. It suffers from a “clever” navigation structure where you can swipe to get to different areas of the app, or back to the menu, but with no clue as to what “direction” anything is. Currently the only thing you appear to be able to do is add new watch faces. Pebble’s hopes of getting the SDK out early enough for people to have written apps for the watch appear to have been (aha) dashed.

There’s platform variation too. Apple only expose email and SMS/iMessage notifications over Bluetooth, so until the Pebble app can send notifications in the background (which I hope will be soon), only Android can send arbitrary notifications for whatever apps you want (Personally, SMS & email are fine for me for now, though I’m interested in future apps), and I’m not sure if this is a pebble bug or because I’m using exchange-synced contacts on iPhone, but the callerID seems not to be working very well.

There’s a bit of beta quality about most of the software and firmware, in fact. The phone ships with the light-sensor for the backlight disabled, because when you enable it any button click toggles the backlight, including scrolling the menus, turning the device into an SOS beacon. The “Tap” functionality to light the backlight at night also doesn’t appear to be there yet. That all said, the basic functionality is working, and all the problems I’ve found are very much software issues, things that can be fixed with future firmware and app updates for the most part (save any limitations Apple put on the communication. Android users are generally going to find generic integration better, I think). The music functionality, where the watch will display the track name and artist for the currently playing song, as well as Skip, Pause & Rewind, is working very well, even for Spotify and arbitrary music players (though I’m told this isn’t generically true for Android right now).

…and right now I can’t recommend you get one.

I preordered mine in April last year, for $115 + P&P, which is kind of outside my direct “I paid x for this” mental connection, but I’m not currently convinced that if I were to buy one right now for that price, I’d be happy with it. In fact, I probably wouldn’t get one. If the apps start coming though, and if it becomes more useful (being able to see what’s on my phone without digging around in my pocket? Handy, but not £80 handy), that might change, but there are too many “not currently working”, “Only on android”, and “not quite there yets” in the paragraphs above for comfort.

We’ll see how much of an everyday necessity it becomes in the next few weeks, and I’ll report back then.