"You've forgotten to commit, you moron"

In the last week, I’ve been to the cinema more often than in the previous year. I went to see three films you already know about. Scott Pilgrim vs The World (Which opens with a pixellated version of the Universal logo under a chip-tune version of its bombastic theme), Inception (Which opens with Leonardo DeCaprio faceplanted on a mysterious sandy beach), and The Expendables (Which opens with the explosive death of quite a lot of the stunt crew playing Somali Pirates).

Inception is great. Terry Pratchett once said that the greatest problem he had launching his books in the US wasn’t that the audience were too stupid to understand it, it was that the publishers *thought* the audience were too stupid to understand it. For a Hollywood blockbuster, Inception has a deep and complicated plot, almost none of which gets explained in words of one syllable more than once. It does not have a romantic B-Story, it doesn’t wrap up everything with a neat little bow, and I can’t say anything about it without spoilering the plot. As a point of reference, I have not been able to convince my girlfriend to go see it.

Far away from Inception on any scattergraph of summer blockbusters is Scott Pilgrim. It has a romantic A Plot, it has something to say about relationships and emotional baggage, and it has a main male lead who is kind of a dick. My main objection to the sappy-male genre of sappy movies is that a great deal of the time the male lead is the archtypical “Nice Guy”. The inoffensive guy who clings onto the real-world incusion of the divinely created girlfriend of his dreams who stubbonly persists in going out with other people, not realising how much better the world would be if she would just ignore what she wants and go out with him instead. Because this is a trap a lot of writer-types fall into, these characters tend to be author substitutes, and thus win.

Anyway, Pilgrim is from Edgar Wright, who did Spaced and Hot Fuzz, and is thus full of translational jump cuts, quickfire dialogue and such, which fits in perfectly to the Scott Pilgrim world which mixes comic clichés with video game ones. The film is a visual blast, with explanatory infographics pinging over people’s heads as their mental state progresses, a slightly saturated colour scheme and epic boss battles complete with CGI dragons. And it’s as faithful to the comic as you can reasonably expect. I enjoy the comic, and the irreverency to typical movie style really appeals to me. If none of this makes you think “Oh gods, that sounds awful” you should see it. Possibly on DVD. I have, as above, not convinced my girlfriend to.

So, you have a complicated action movie with psychological pretentions; you have a comic book action movie/romantic comedy; and – on the basis I will see “Eat, Prey, Love” over my dead, rotting and shambling corpse, what’s the third movie likely to be? I mean, had I not opened the article with the answer to that question. 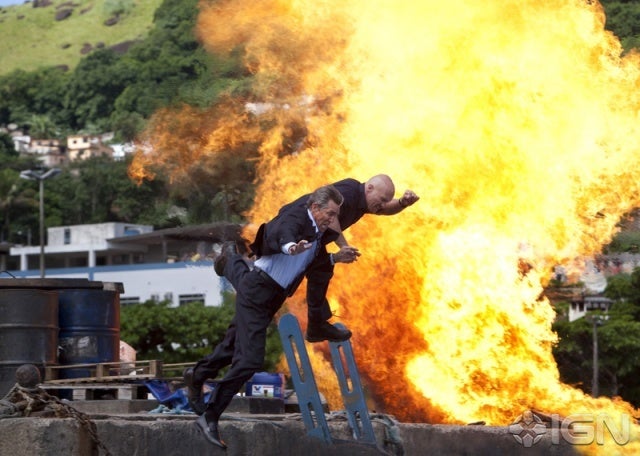 It’s all like that. It’s a series of action sequences papered together with a plot about toppling an island dictator. It’s got Sly Stallone, Jason Statham and Jet Lei shooting people, stabbing people and kicking people to death respectively. And occasionally irrespectively. Everything explodes except the smouldering homoerotic subtext. Guns. Knives. Boom. Cropdusting people to death.

This one, obviously, my girlfriend loved to pieces. It’s a real date flick.

So. Today has been stressful, partly because I’ve apparently done something unforgivable, which I cannot apologise for because…
aquarion
2 minute read

Wilbur wants to kill himself Wilbur, as the title suggests, is suicidal. It’s not working, though. Every time…
aquarion
1 minute read

So, with my time last night between turns playing muliplayer Civ IV (Which was annoying, because the players…
aquarion
3 minute read

So, today I watched King Arthur As a film, it’s mildly bad. As a retelling of the Arthurian…
aquarion
1 minute read